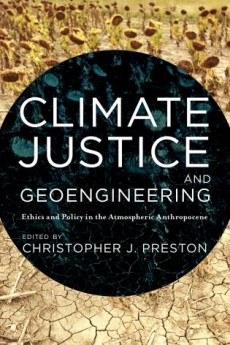 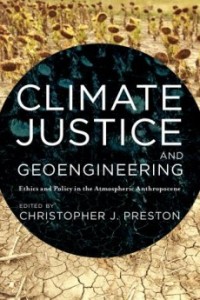 Now that humanity’s industrial emissions have pushed the global atmosphere into states it has not experienced for more than 3 million years, should we call upon our scientists and engineers to try to push it back? This is the question raised by the dramatic prospect of climate engineering (or geoengineering).

Visiting Distinguished Fellow in the Ethics of the Anthropocene at Vrije Universiteit Amsterdam Christopher J. Preston has just published an interdisciplinary edited collection of essays titled Climate Justice and Geoengineering: Ethics and Policy in the Atmospheric Anthropocene (Rowman and Littlefield International 2016) to look at some of the ethical dimensions of this challenge.

Climate engineering is proposed as a helpful technical fix to the climate problem. If the politics of doing what is necessary to avoid catastrophic climate change is simply too complicated, then perhaps there are technical means by which you could achieve the same thing. Deploying reflective particles to the stratosphere or dramatically enhancing marine clouds could each reflect enough sunlight back out into space to helpfully drop global temperatures. Sucking carbon directly out of the atmosphere using specially designed absorptive surfaces or biological means (such as massive-scale afforestation or phytoplankton blooms) could potentially rebalance atmospheric composition towards the more familiar levels of the Holocene. A discussion that had previously resided only in the realm of science fiction – and distinctly outside the realm of serious climate policy – has recently become much more mainstream.

Prospective climate engineers have from the start acknowledged that the social, political, and ethical challenges attending their proposals might be every bit as difficult to overcome as the technical ones associated with deploying exactly the right amount of stratospheric aerosols or figuring out how to successfully sequester any carbon dioxide that was vacuumed from the sky. Climate engineering, in other words, has a significant humanistic and cultural dimension to it.

Ethical challenges around matters of justice include how to secure adequate consent of those affected by climate engineering, how to fairly compensate for unintended side-effects, how to avoid moral corruption in the behavior of the high-emitters, and how to properly handle a treacherous power dynamic between rich and poor countries. Currently unanswered questions include: Who would run these geoengineering projects? How would the public have a fair say? Who would be blamed if some countries found themselves worse off under a geoengineered climate instead of better off? Can we be confident of the geopolitical security necessary for a multi-decadal engineering of the global climate? How concerned should we be about these technologies be used as weapons of terror? How much cooling is ultimately desirable?

None of these puzzles are easy to solve. The possibility of gross injustices is always close at hand. And even if the threats to global justice could be ameliorated, there remains a giant overarching concern in the background about whether intentionally manipulating the climate is something our species should even be contemplating in the first place. Perhaps the skies should remain “the realm of the Gods”?

What makes these ethical challenges particularly hard to solve is the context in which decisions now have to be made. Severe climate injustice already shapes the playing field. Climate harms are upon us and developing countries are under climate pressures that rich countries never experienced during their own industrialization. Those who are enthusiastic about geoengineering face the challenge of showing how these strategies can be incorporated into climate policy in such a way that the existing injustices of climate change are not unfairly compounded by any attempts at climate engineering. As the UK’s Royal Society declared in one of the first reports on climate engineering back in 2009, “The greatest challenges to the successful deployment of geoengineering may be the social, ethical, legal and political issues associated with governance, rather than scientific and technical issues.” This observation is likely to remain true over the next decade as climate engineering increasingly becomes a part of the climate policy discussion.